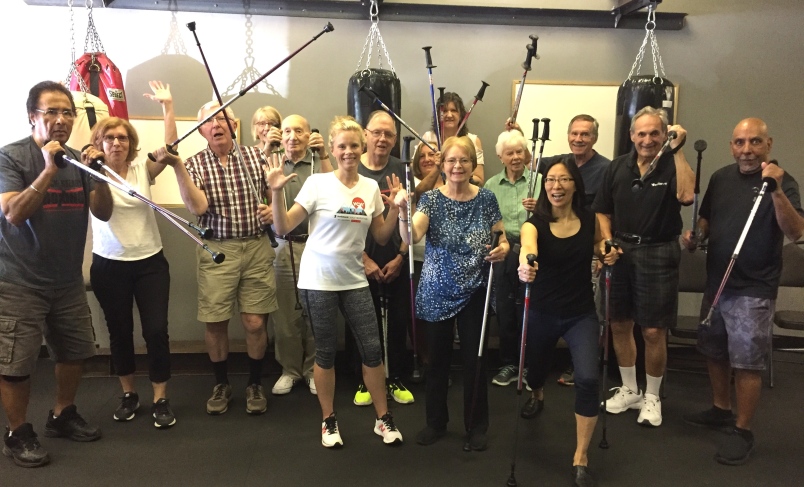 IMPACT Parkinson’s in Sapperton has some special events planned for April.

The City of New Westminster recently proclaimed April as Parkinson’s Awareness Month. The non-profit Parkinson’s Wellness Centre – which is being renamed IMPACT Parkinson’s and is a launching a new website on World Parkinson’s Day on April 11 – has a number of announcements, workshops and events planned this month.

* Friday, April 12: An urban poling workshop will teach participants about the benefits of using ACTIVATOR poles for Parkinson’s and how to use the poles. The workshop, which is by donation, is from 1 to 2:30 p.m.

* Wednesday, April 17: Walter Reich, a 70-year-old cycling enthusiast from Ontario who is cycling across Canada to raise awareness and funds for Parkinson’s, will visit the centre from 9:45 to 10:30 a.m.

* Saturday, April 27: Creative Dance for PD, Latin style. Trina Frometa, an award-wining Venezuelan choreographer and a certified teacher of the Dance for PD program in New York, will lead the workshop. The workshop, which is by donation, is from 1 to 2:15 p.m.

IMPACT Parkinson’s is also partnering up with two local businesses, including Amaranthus, a new plant-based restaurant that’s set to open in River Market. Plans are in the works to create more awareness about the disease in various ways, such as including an item on Amaranthus’s menu where a portion of the price goes to IMPACT Parkinson’s and having an annual fundraiser to support the centre’s Parkinson’s programs.

IMPACT is also partnering with Choices Market, which is planning education information sessions and hands-on tips for health eating and cooking. Details are still being finalized.

According to the Parkinson Society British Columbia, about 13,000 British Columbians are affected by the condition, making it the second most common neurological disorder after Alzheimer’s.

IMPACT Parkinson’s is located at #103-450 East Columbia St. For more information or to register for programs, contact parkinsonswc@gmail.com or 604-525-2631.