Exercise is a Real Prescription for Parkinson’s 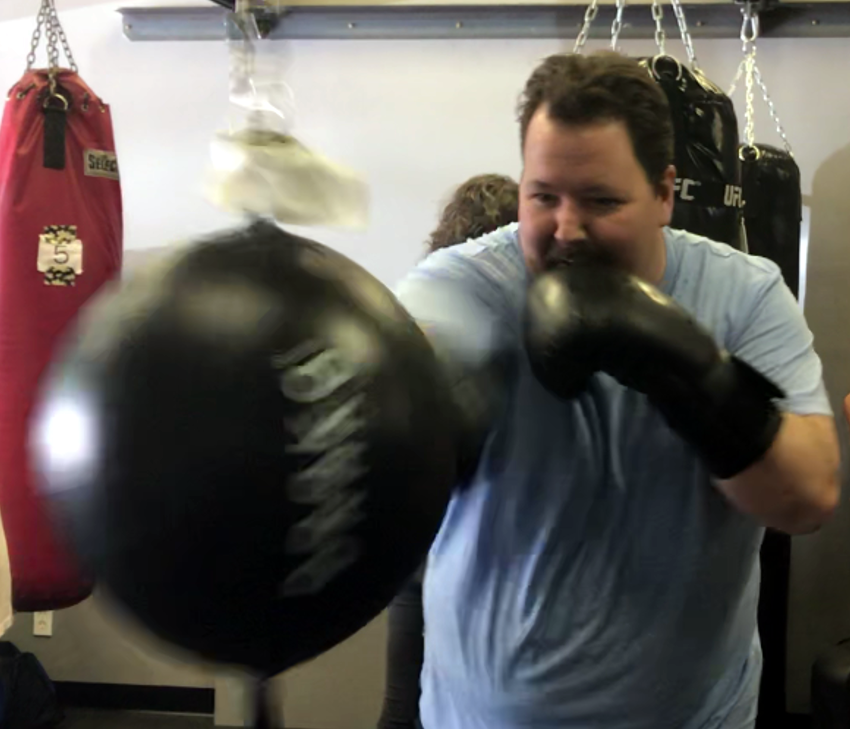 07 Dec Exercise is a Real Prescription for Parkinson’s

Posted at 02:34h in Local News, Podcasts by admin

I have never been very athletic. I have never been excited by thinking about or participating in exercise. The idea of a daily workout, gym memberships, exercise classes or scheduled physical activity of any kind has always been something other people do.

In August 2017, my neurologist Dr. Jonathon Squires at the Djavad Mowafaghian Centre for Brain Health at UBC gave me a prescription for levodopa-carbidopa and a serious recommendation to exercise.

“The only thing we know so far that slows the progression of Parkinson’s disease is physical activity. It does help control the symptoms and it does help slow the progression as far as we know. So it’s very important,” Dr. Squires told me.

Never one to accept exercise as the answer I suggested the medication might be enough. Dr. Squires rebutted, “In some ways, I feel like all the medications that we use are really just to enable people to exercise.”

That’s when I realized this exercise thing is real, but I wanted to know why. I sought out Dr. A. Jon Stoessl. He’s the head of neurology at UBC, co-director of the Centre for Brain Health and one of the neurologists who has been researching the benefits of exercise for people with Parkinson’s disease. I asked if there was anything else aside from exercise I could explore. Anything. Anything?

Dr. Stoessl didn’t hesitate or cushion the blow. The answer was no.

“In fact, we don’t have any medical treatments that have been shown to have an impact on disease progression. So, we can treat the symptoms, but we don’t end up treating the underlying disease. Exercise may actually be the way to do that.”

Research results suggest an exercise routine that consists of a combination of aerobic and resistance training, four days a week, for a half-hour each day. Dr. Stoessl told me if I can still carry on a conversation while I’m working out, I’m not working out hard enough. He also offered this advice, “Do what you hate the least, because it’s no good someone prescribing you a half-hour on the treadmill every day, if you will never get on a treadmill.”

So what exercise do I hate the least? In this episode of When Life Gives You Parkinson’s, I explore a variety of exercises in search of one or some that I can commit to. I lace up boxing gloves for a Rock Steady Boxing class in at Impact Parkinson’s in New Westminster.

Trainer Robyn Murrell takes people with Parkinson’s through circuit training: “You’ve got your footwork, hand-eye coordination, balance, cognitive, and speed. They can all relate somehow to all the different symptoms of Parkinson’s.” She notes the results are beyond the physical improvements. “It gives them a lot more confidence. I think that’s the biggest thing that I see.”

Through my search for an exercise right for me, I visit Rain City Fitness to try Cross Fit with Hilary Vanderliek. She was diagnosed with Parkinson’s when she was 24. “I love Cross Fit because it’s given me the opportunity to realize my potential.”

I also begin to find physical activity and a way to retrain my brain how to walk again through Parkinson’s specific Physiotherapy. Naomi Casiro, the founder of NeuroFit BC, said: “With Parkinson’s, there something we call motor weakness. You know, your muscles are there and they’re ready to function, but the signals aren’t getting through.  They’re there, they just aren’t being utilized. They really want to be woken up, right?” Casiro says waking up those motor patterns through Physiotherapy often leads to people’s functions drastically improving.

All of these experiences from the boxing ring to the neurologist’s office have been overwhelmingly positive and encouraging. They’re all realistic and want to help me and others with Parkinson’s live our best life. Now it’s up to me to commit to being physically active, for the rest of my life, for the best chance to keep Parkinson’s from progressing faster than it wants to.